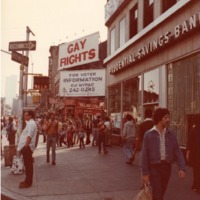 Rudy Grillo was an activist and producer who served as a member of the board of directors of the Christopher Street Liberation Day Committee (CSLDC) from its inception until 1976. The CSLDC was the original organizer of the New York Gay Pride march and rally until 1984, when Heritage of Pride took over. Grillo was a member of the Gay Activists Alliance (GAA), an organization formed in December 1969 in response to the more radical Gay Liberation Front (GLF). The GAA was exclusively focused on gay and lesbian issues and became known for “zaps”, a guerrilla style of demonstrations that focused on maximizing media attention which later activist groups, like ACT UP, took inspiration from.

Grillo was also a producer for radio programs broadcast on community based radio station WBAI, the New York station of the Pacifica Radio network. Most notably, he produced Gay Rap (1977-1985) — a weekly one-hour program which he would often participate in. Grillo served as well, as the station’s Program Director of the Gay Men’s Department from 1980 until its dissolution in 1982.

These records were donated to the LGBT Community Center National History Archive by Rudy Grillo on May 17, 1990. Mr. Grillo was a member of the Christopher Street Liberation Day Committee from 1973 to 1976 and was designated by the Committee as a keeper of their records until an appropiate repository could be found. Additional material, including three audio tapes, and papers from 1976 to 1978 were added by Mr. Grillo in 1992. The bulk of the collection including most of the papers and the majority of audio tapes were donated to the Archive by the Grillo estate in 1997.

*Please note that Tape 4 has not been digitized.

Entities other than The Center may hold the rights to the Rudy Grillo moving image archive collection. Due to the sensitive nature of the content and in the interest of the protection of privacy of featured individuals, viewing restrictions apply. Access to this material must be formally requested and processed by The Center. Please contact  archive@gaycenter.org